8 creepy objects in Asia you may not know about 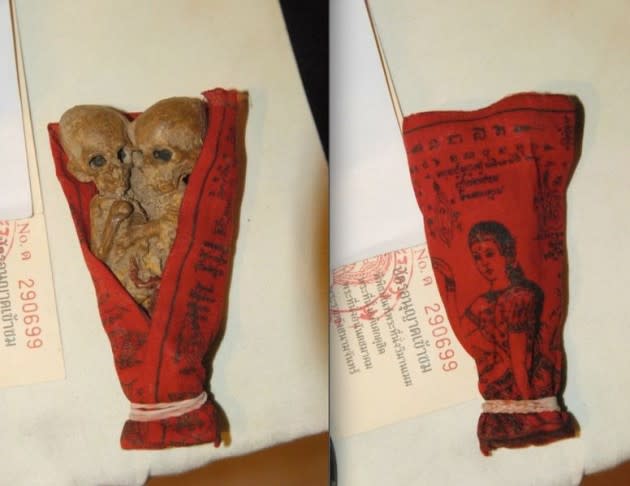 A Thai airline made news for allowing their passengers to purchase seats for dolls which are treated by their owners as real children, due to the belief that they possess supernatural powers. However Thailand’s aviation authority stepped in shortly to restrict the sale of such air tickets, announcing that the dolls will be classified as luggage, reported The Bangkok Post.

Even if those dolls aren’t going to sit next to you on the plane, there are plenty of spooky things out there. Here are a list of eight creepy objects in Asia that will make all your hair stand. If you are feeling lonely, dim all the lights and read this. After a while, it would seem like you are not alone anymore…

Kumantong (KMT) is a divine child spirit which is believed to bring luck and fortune to the owner if properly revered. It is said that KMT is actually a baby ghost, but they have to accept Buddhism and do no harm before they are given the status of “Kumantong”, or “golden little boy”.

Traditionally, KMTs are made (or invoked) by grilling the dead fetus to extract the oil. The dry fetus will then be painted with Ya Lak (a kind of lacquer used to cover amulets) and covered in gold leaf. However, these practices are now illegal. KMTs are now commonly made and moulded from clay, with other ingredients like cemetery soil and bone fragments added to the clay statue.

Proponents of KMTs believe that by offering these souls of aborted fetuses a place to reside and with daily recitation of mantras, the keepers transfer their merits to these souls and pray that they are liberated. At the same time, these spiritual beings will bring prosperity and fortune and look after the keepers.

Child Angel, otherwise known as “Luk Thep” in Thai, have become increasingly popular after several celebrities in Thailand shared photographs and stories of their own Luk Thep on social media.

Now, owners would frequently share photos of their winning lottery tickets, attributing their luck to the dolls, further increasing their immense popularity.

Luk Thep became so popular that Thai Smile Airways recently instructed its staff to allow passengers to purchase a seat for their dolls. The internal Thai Smile memo states that the dolls have to be buckled up like human passengers and will be served snacks and drinks. The memo also explains that the Luk Thep dolls can be treated like children, because they have undergone a “spiritualization” process that breathes life into them.

Although they seem quite similar, there is a key difference between a KMT and a Luk Thep. Unlike KMT, Luk Thep does not need a dead fetus or any other ingredients. They simply invite a child’s spirit to possess a factory-manufactured doll; a modern twist on traditional Thai KMT.

A Bangkok buffet restaurant has also started running a special for the dolls. “In the past month, more than 30 customers have brought their Luk Thep to eat at Neta Grill,” the restaurant said on its Facebook page. “Neta Grill is open to all worshippers and we’re glad to serve Luk Thep at children’s prices on the condition that all of the food ordered is consumed.”

A toyol is a mythical spirit in the Malay mythology of South-East Asia (notably Indonesia, Thailand, Malaysia and Singapore). Toyol, which means mischievous thief, is a child spirit invoked by a bomoh (Malay witch doctor) from a dead human fetus and brought back to life with incantations.

Unlike KMT or Luk Thep, toyols belong somewhere in the demonic category. A person who owns a toyol uses it mainly to steal things from other people or to create mischief. Besides offering them sweets, toys, milk and biscuits, the owner of a toyol would also need to feed them with their own blood.

The toyols usually look like a mummified baby with green or gray skin. It is usually kept in a glass jar and hidden away in a dark place until it is needed.

It is said that once you obtain a toyol, you and your descendants will be condemned to own it for the rest of their lives.

4. Amulet made from cats’ embryo

Noo Kin Nom Maew (Mouse Drinking Cat’s Milk) is another highly sought after item in Thailand. These amulets are generally made with ingredients like cats’ embryo powders, ashes made from stillborn cats and mice and sacred oil.

It is claimed that these amulets help to increase the wearer’s charm and attractiveness, bring in customers, and grant wishes and wealth.

Some South-East Asian cultures believe that vaginal fluids, including menstrual blood, have special supernatural powers and is commonly used by individuals and witch doctors in rituals. An Indonesian maid was charged in Hong Kong after adding menstrual blood to her employer’s food, in the belief that the recipe would help ease her strained relationship with her employer.

One “culinary love potion”, called Nasi Kangkang, is prepared by a woman naked from the waist down, squatting over steaming white rice, thinking about the man she wants to control, and allowing sweat and vaginal discharge to trickle into the rice. The man who eats this rice will supposedly be faithful and obey the woman’s commands.

In one of the cemeteries in Malabon, Philippines, an almost life-sized sculpture of a feral devil stands over Archangel Michael with a fork aimed at his face. A source of creepy urban legend in the country, many stories were spun about the statues over the decades.

The statues are on the grave of a Simeon Bernardo, who died in 1934. He instructed his children to build his grave in that manner. The statue depicts Satan triumphant over St. Michael the Archangel, and has a stone tablet beside it containing a dialogue between the duo, where Satan proclaims dominion over the world and mankind. For a Christian-majority country, the very thought of Satan triumphant and that someone even had the gall to make a statue of it, creeped them out.

The elderly folks living near the cemetery swore that the statue used to be smaller, but was mysteriously growing each year. Also, at night, the statue of the devil was said to come alive and haunt anyone who loiters around the cemetery. This was allegedly why the statue was subsequently encased in an iron cage—to protect the people from its devilish antics.

A documentary was done by a national TV station in 2012 and quelled some of the rumors, but many Filipinos still believe in this urban legend.

The banana tree is believed to be host for female spirits in folktales from Singapore, Malaysia, Thailand, India and Indonesia. In Malay and Indonesian mythology, the female spirit that resides in the banana tree is commonly known as Pontianak or Kuntilanak. In folklore, a pontianak usually announces its presence through high-pitched baby cries. Its presence can sometimes be detected by a nice floral fragrance identifiable as that of the plumeria, followed by an awful stench afterwards.

In India, it is known as Mohini. It is associated with the scent of jasmine flowers and the sound of kolusu (a type of bangle worn by Indian ladies on the feet around the ankle). Mohini possesses guys and will try to bring the person into her world by getting the person into accidents or to make him commit suicide.

In Thailand, this female spirit is called Nang Tani. This ghost inhabits clumps of wild banana trees and is popularly represented as a beautiful young woman wearing a green traditional Thai costume. Amulets of Nang Tani are popular and is said to have the ability to grant the wearer wishes in all aspects.

Jenglot is a deformed creature that is described as looking like a tiny, human doll in Indonesian culture and mythology. It is believed to be found in Indonesia, especially in Java.

Some believe that jenglot is a magic person who has died, but was rejected by the earth. Therefore, their bodies do not decompose, but rather, shrink. They are believed to have mystical powers and need to be fed with blood, or else misfortune will befall on the person owning the jenglot.

examination done by a forensic team from Cipto Mangunkusumo Hospital (RSCM) in Jakarta, jenglots have similar characteristics to humans. However, other sources cite that these are made by Indonesian sorcerers, usually from juvenile monkey skeleton, chicken skin, goat hair, (or sometimes human hair) etc. They are then ritually ensouled like a voodoo doll.

Which object creeped you out the most? Do you have any creepy stories and objects that you know of in your country? Hashtag your post with #creepypost and share them with us!

The post 8 creepy objects in Asia you may not know about appeared first on migme.