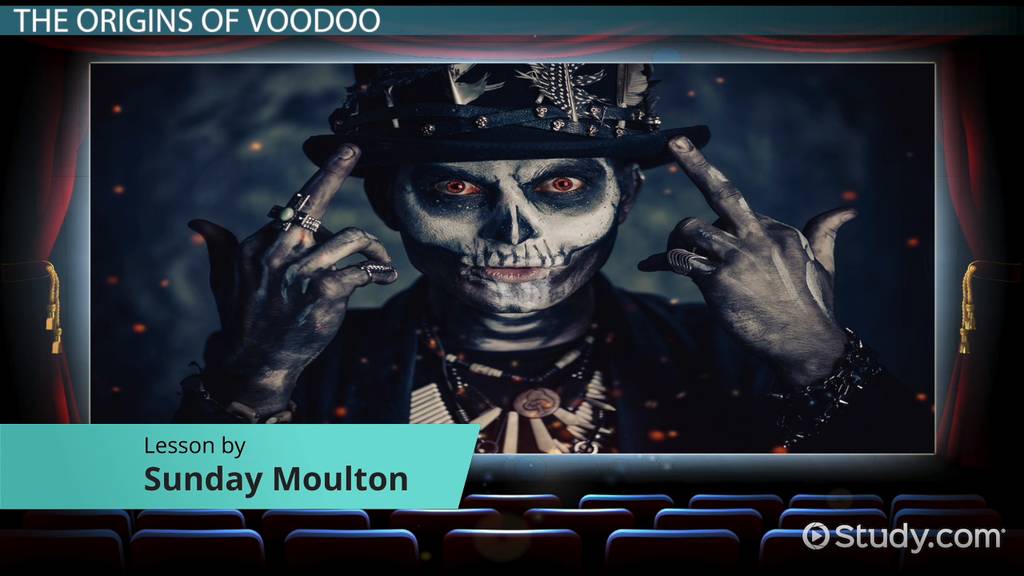 In this lesson, we look at the mysterious and intriguing religion of Voodoo. To sort fact from fiction, we’ll explore some of their actual beliefs and a few of their rituals to get a better idea of what Voodoo really is.

The Origins of Voodoo

Just about everyone has heard of Voodoo, whether from the many horror films of the 20th and 21st centuries or from visiting tourist attractions in New Orleans. How much do people really know about this religion though? What are the facts among all the folklore and sensational fiction? In this lesson, we’ll take a look at the actual beliefs and some of the rituals to help dispel the myths and better understand this religion.

Where Did It Come From?

The early origins of Voodoo, also spelled Vodou, Voudou, and Voudon, likely came from the West African country of Dahomey, now called Benin. In the Fon language, the world ”voodoo” means ”spirit.” During the Slave Trade, a shameful time in human history, many people were taken from Africa and brought to the New World to work as slave labor. One of the places where they were taken to was Haiti, a Caribbean island. Here, a large number of West Africans kept their traditions alive, even though they were also forced to adopt Catholicism. Voodoo developed as a blending of their traditional beliefs and customs with the practices of Africans from other regions and the influence of Catholicism.

When the Haitian slaves fought back against their captors in 1791, a revolt lead by Voodoo priests called hougans and Voodoo priestesses called manbos drove the French out of Haiti during the course of 5 years. Some of the French fled to New Orleans and brought some of their slaves with them. These slaves brought Haitian Voodoo. While many slaves in New Orleans practiced their own variation of Voodoo, it was not as influential as the quickly spreading Haitian Voodoo.

The West African roots of Voodoo come from the ancient practices of ancestor worship and animism, which is the belief that spirits inhabit all things, including animals and plants. Voodoo practitioners believe in a supreme god named Bondye who is all-powerful yet remains detached from human affairs. Bondye and all the spirits dwell in an invisible world entwined with our own. Although Bondye remains detached, Voodoo practitioners can seek help from the many spirits of the ancestors and nature to help with their problems.

TheLwa, pronounced as Loh-ah, are spirits more powerful than a person’s deceased relatives. These spirits are not single entities but groups or categories of spirit types, such as the warrior, the mother, the sorcerer, and so on. Thus, praying to the Lwa Ogun might call any number of Lwa warrior spirits.

A few exceptions exist for extremely powerful Lwa or powerful ancestral spirits tied to specific locations who are only a single, powerful spirit. An example of the first type is Papa Legba, the gatekeeper between our world and the invisible world of the spirits. Interestingly, with the forced imposition of Catholicism on the West Africans, they equated St. Peter with Papa Legba in their worship. The second type were locally-bound and powerful ancestral spirits and include famous figures like Marie Laveau, a powerful Voodoo priestess of New Orleans.

The Lwa are believed to enter our world and interact with people through spirit possession. This is nothing like the demonic possession you might be familiar with from popular films like The Exorcist, in which the spirit must be battled and driven out of the person. Instead, the Voodoo practitioner is overtaken by the spirit, usually as part of a ritual. The possession only lasts for a few minutes to a few hours, leaving the possessed person exhausted and with no memory of the experience. During that time, however, the spirits will prophesize, heal, and bless people.

Over 79,000 lessons in all major subjects

Voodoo rituals include both public events for the community of believers and private practices done between the priest or priestess and the person or persons requesting the ritual for personal matters. Spirit possession often occurs as part of a public ritual called a Fete for the Lwa, which loosely translates to Party for a Spirit. Calling the spirit usually involves drumming, chanting, and singing.

A very special ceremony which involves a Fete for the Lwa is the Manje Yanm, which is an event to celebrate the yam harvest. For this event, the best yams are collected from the harvest, but no one may eat any of the harvested yams until the end of the two-day ceremony. The first night, the yams are put to bed (or kouched) in a way that allows them to absorb the spiritual energy from the Lwa. The next morning, the yams are ceremonially awakened. Throughout the day, the yams are cooked along with other foods as a feast for the spirits.

The second night, the community hosts a Fete for the Lwa and call many spirits to possess people who were specially and secretly prepared for possession. Once possessed, these people partake of the feast for the Lwa within them. The other people in the Voodoo community can then feast as well, enjoying the newly harvested yams.

Private rituals, however, do not include such elaborate actions or preparations. Priests and priestesses might do a reading or divination to tell someone’s future to solve a problem. The most common private ritual is a ceremonial bath to cleanse a person of evil energy or heal a sickness. Other rituals include Gads, which are protection spells; Mariaj Lwa, in which someone marries a spirit to gain its power or protection; and Anvwa Mo, where spirits are sent to attack an enemy.

Let’s take a few moments to review what we’ve learned about voodoo and its beliefs and rituals.

Voodoo comes from a combination of traditional West African practices of ancestor worship and animism, which is the belief that spirits inhabit all things, including animals and plants, combined with other African beliefs that likely originated from the area known today as Benin.

Another belief that is combined with voodoo is actually Catholicism. In fact, Voodoo practitioners believe our work is entwined with the world of the spirits who are called Lwa and the Lwa, known as Papa Legba, is associated with the Catholic Saint Peter. It is believed that the Lwa posses people as part of public rituals, like the Fete for the Lwa, which translates to ‘party for a spirit’, and is a spirit possession that often occurs and the Manje Yanm, which is an event to celebrate the yam harvest. Private rituals are done by priests called hougans and priestesses called manbos.