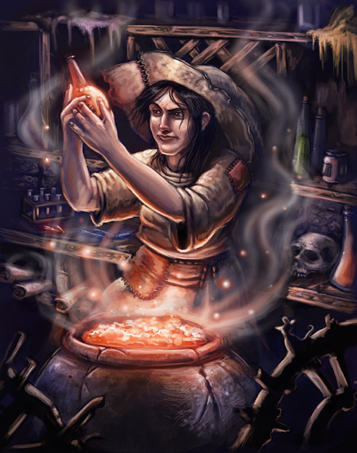 The power to utilize Alchemy, the mystic and scientific pursuit of the power of the Philosopher’s Stone and Universal Panacea. Practitioners of this magic/science are known as Alchemists. A form of Magic and Science.

According to history, the practices of alchemy originated in Mesopotamia and Greco-Roman Egypt in the first centuries AD. They were subsequently practiced across Europe, Africa, and Asia. In truth, the primary goal of alchemy was to purify, mature, and perfect different materials and substances. However, mythology is what lead alchemy to become the idea of people trying to turn metal into gold and looking for the Philosopher’s Stone.

High Albiter Balthassar (Anima: Beyond Fantasy), the scientific master of the Azure Alliance.

The Alchemy perk tree (The Elder Scrolls V: Skyrim) focuses on creating various potions and poisons to aid the player. The stronger the skill, the more potent the mixture.

Wahl Icht’s robot (Fairy Tail) can use alchemical magic to alter the metallic components of his body to make him able to mot only to be unharmed by electricity, but to absorb it as well.

The Elric Brothers (Fullmetal Alchemist) are both alchemical prodigies…

May Chang (Fullmetal Alchemist) is a practitioner of Alkahestry, a Xingese variation of alchemy that draws power from the Earth’s chi.

Baron Draxum (Rise of the Teenage Mutant Ninja Turtles) is an “alchemist warrior mutant from the Hidden City” and “the self-proclaimed protector of all mutant-kind”.

Ivy Valentine (Soul Calibur) can use alchemy from her father-in-law’s research.

Mephistopheles (Valkyrie Crusade) is a demon lord with very powerful and unique alchemy and magic and posses the power to grant wishes.

Escha Malier (Atelier Escha & Logy: Alchemists of the Dusk Sky) is a excellent alchemist, being self taught in traditional alchemy through observing her mother.

Like Escha, Logix Ficsario (Atelier Escha & Logy: Alchemists of the Dusk Sky) is also a talented alchemist, though unlike Escha he specialized in modern alchemy, making his alchemy more diverse and versatile than Escha.

Add a photo to this gallery