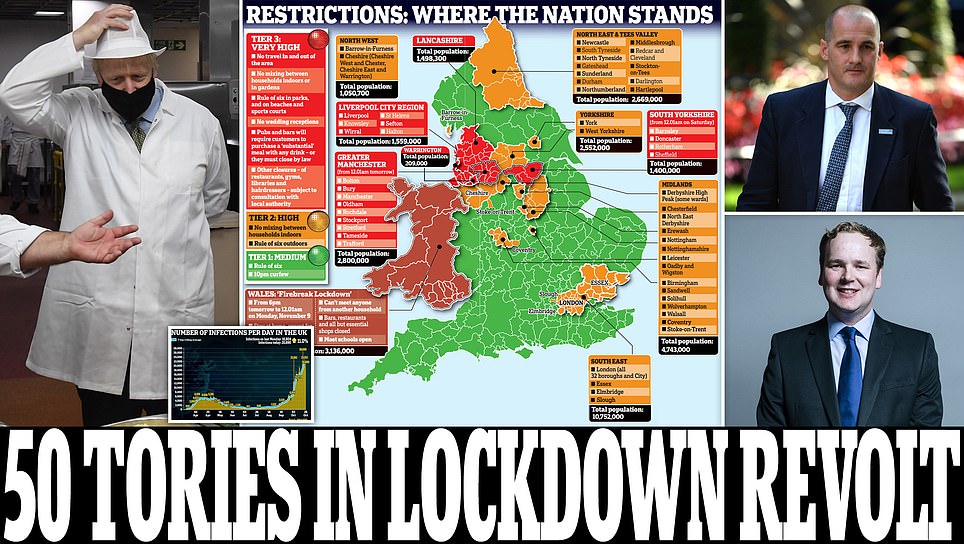 A letter to Boris Johnson from the Northern Research Group – a newly-launched alliance of Tory MPs led by ex-Northern Powerhouse minister Jake Berry – outlines the group’s demands, which include a tailored economic recovery plan for the north. Mr Berry says that the virus could widen the North-South divide and ‘send the North into reverse’. His group is now calling for Mr Johnson to ‘level-up the North’ – something the PM claimed he would do following sweeping Conservative gains in the region in the General Election. It comes as around 8million people in England face living under the toughest Covid-19 restrictions by the end of the week after officials confirmed four separate parts of Nottinghamshire will be thrust into a Tier Three lockdown from midnight on Wednesday, following three days of crunch talks with the Government. Officials have agreed to adopt the draconian measures in Nottingham City, Gedling, Broxtowe and Rushcliffe in an attempt to drive down transmission. It will mean all pubs and bars have to close unless they serve meals, while people are banned from mixing with anyone they don’t live with indoors or in private gardens and beer gardens. The restrictions across the East Midlands county – expected to be officially announced by No10 tomorrow – were revealed just hours after ministers finally confirmed Warrington will also be subject to the strictest measures as of midnight tonight, following a spike in cases among over-60s. The Health Secretary today insisted it was ‘time to take action’ and once again warned ‘sacrifices must be made’ in order to crack down on the disease.